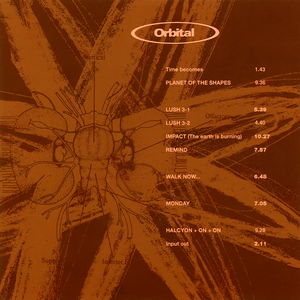 Orbital 2 is the second album from the British electronica duo, Orbital. It is also known as the Brown Album to differentiate it from Orbital's 1991 eponymous debut. It was released in May 1993 and reached the #28 on the UK album charts. On Orbital 2 the duo aimed to make more atmospheric music than the dance raves of their first album. They used more complex rhythms and denser arrangements on the appropriately monickered pieces entitled "Lush" but still proving themselves capable of making quality pop music on "Halcyon + On + On", with vocals from Kirsty Hawkshaw of Opus III. The album begins with the same speech sample (by actor Michael Dorn in Star Trek: The Next Generation) which opened their first album. The second song, "Planet of the shapes", contains a sample from the movie Withnail & I, saying "even a stopped clock gives the right time twice a day". The brothers enjoy aural puns, and the use of the sample from Star Trek: The Next Generation (which appeared on the opening of their first album) was meant to infuriate listeners by making them believe for a few seconds that they had bought a mispressing. The muffled intro on "Planet of the Shapes" has the intentional addition of record static and crackles, followed by the sound of a needle skipping grooves then scratching across the record, also meant to infuriate fans, who bought the vinyl edition, by making them think their copy was less than mint. This album is featured in the book 1001 Albums You Must Hear Before You Die alongside their 1994 LP 'Snivilisation'. It (along with the In Sides album) was also included in Q magazines "90 Best albums of the 1990s"